As a non-permanent member of the United Nations Security Council, Vietnam said its top concern is finding consensus among the 15 members. 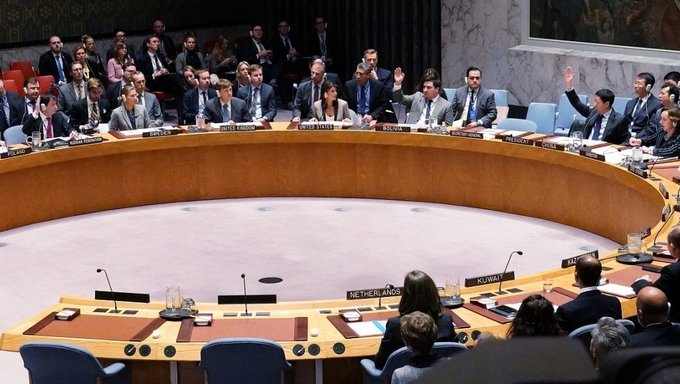 Members vote during a meeting of the United Nations Security Council about the situation in Crimea at U.N. Headquarters in New York, November 26, 2018. Photo by AFP/File.

"When Security Council resolutions do not find consensus or are vetoed by a permanent member, it could cause division, and that is something we need to try our best to avoid," Deputy Prime Minister and Minister of Foreign Affairs Pham Binh Minh said.

Vietnam secured 192 out of a total of 193 votes, a record number, to win a non-permanent seat last Friday replacing Kuwait.

"Vietnam will need to build close coordination with other permanent and non-permanent members," Binh said.

Yet Vietnam should express its own viewpoints on all issues the council discusses just like any other members, he said.

With its experience, Vietnam hopes to contribute to post-conflict resolution, including mine action, and its priority is to strengthen the role of multilateralism and promote respect for international law, he said.

"One must respect international laws when addressing security issues, and that is the highest purpose that Vietnam wants at the UNSC."

In 2020 Vietnam also becomes chair of the Association of Southeast Asian Nations, and this would enable it to strengthen cooperation between the UNSC and regional organizations, which the U.N. cherishes, he said.

The large number of votes it got indicates that the international community highly rates Vietnam’s ability to make contributions to global issues, the deputy PM said.

The UNSC consists of 15 member nations, of whom five are permanent. Of the 10 non-permanent members, five are elected from Africa and Asia, one from Eastern Europe, two from Latin America, and two from Western Europe and other states.

Five are elected each year on a regional basis.

The council is charged with ensuring international peace and security, accepting new members to the United Nations and approving any changes to its charter.