21/05/2019 - Global growth slowed sharply in late 2018 and is now stabilising at a moderate level. Escalating trade conflicts and dangerous financial vulnerabilities threaten a new weakening of activity by undermining investment and confidence worldwide, according to the OECD’s latest Economic Outlook.

The global economy is expected to achieve moderate but fragile growth over the coming two years. Vulnerabilities stem from trade tensions, high policy uncertainty, risks in financial markets and a slowdown in China, all of which could further curb strong and sustainable medium-term growth worldwide.

The OECD projects that the global economy will grow by 3.2 per cent in 2019 and 3.4 per cent in 2020. The Outlook includes downward revisions for many major economies and warns that current growth rates are insufficient to bring about major improvements in employment or living standards. 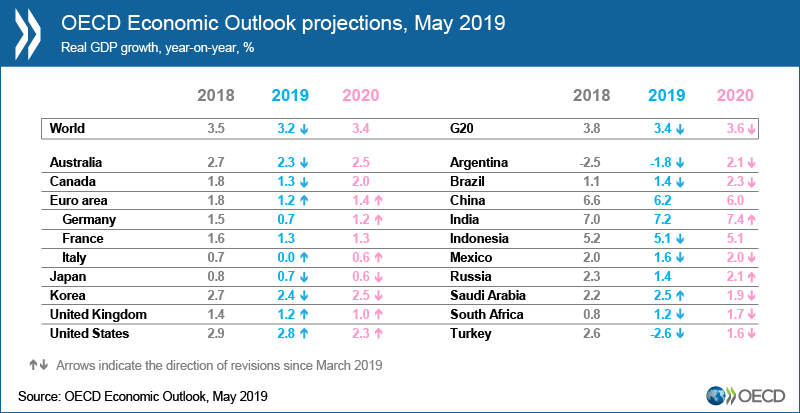 The Outlook identifies continuing trade tensions as the principal factor weighing on the world economy. It notes that world trade – a key artery of the global economy – is projected to grow by just over 2% this year, which would be the lowest rate in a decade. It underlines that the current cycle of trade disputes is hurting manufacturing, disrupting global value chains and generating significant uncertainty that is weighing on investment decisions, and highlights the risk of further disruption.

China remains key to global economic growth, according to the Outlook. Significant fiscal policy stimulus has buffered the economy as it rebalances from investment and export-led growth to a more domestic footing. A sharper slowdown than already seen in China would pose important risks to both global growth and trade prospects.

“The fragile global economy is being destabilised by trade tensions,” said OECD Chief Economist Laurence Boone, launching the Outlook during the annual OECD Forum in Paris. “Growth is stabilising but the economy is weak and there are very serious risks on the horizon. Governments need to work harder together to ensure a return to stronger and more sustainable growth,” Ms Boone said. Read the speech by the OECD Secretary-General.

The Outlook calls on governments to act now to ensure a stronger economic future. It calls for a return to international cooperation and multilateral dialogue to restore predictability in policy and relaunch trade. It renews calls for combining structural reforms in all euro area countries with additional public investment in low-debt European countries. This should focus on digital, transport and energy networks as well as the education, training and competition reforms needed in the 21st Century economy, which would add momentum to a growth rebound, boost productivity and spur wage growth over the medium term.

Media queries should be directed to the OECD Media Office (+33 1 4524 9700)
For more information, visit: http://www.oecd.org/economy/economic-outlook/.

Working with over 100 countries, the OECD is a global policy forum that promotes policies to improve the economic and social well-being of people around the world.