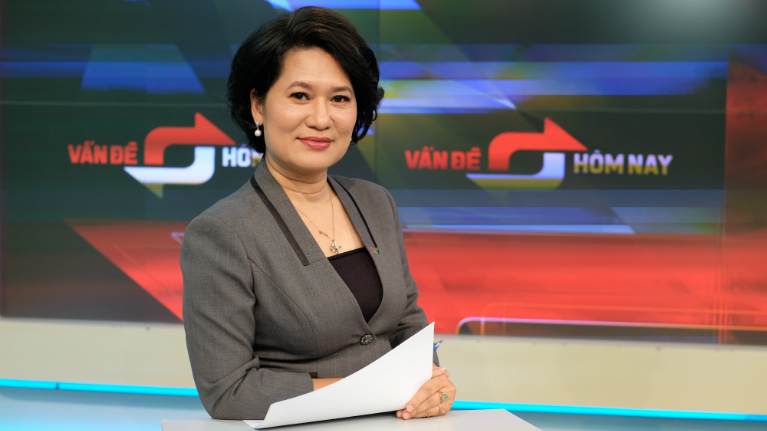 HANOI, VIET NAM (ILO news) - With all eyes on a huge screen in the press centre of the National Assembly building, in the middle of old Hanoi, reporters and camera crews await important decisions made by lawmakers. At the headquarters of Viet Nam National Television (VTV), Nguyen Thu Ha, Deputy Director of the News Department, is also closely following the debates on the reform of the country’s Labour Code, particularly that on narrowing the gender gap in retirement age.

Women in Viet Nam currently retire five years earlier than men, at the age of 55. The draft revised Labour Code aims to increase the female retirement age to 60 and the male to 62, thus reducing the gender gap to two years.

“I hope the deputies can see the rationale behind it and will adopt it,” says Ha. She aired a talk show on the retirement age increase, including gender gap bridging, on the evening before the discussion on the revised draft Labour Code, in the hope of providing the public and lawmakers with useful background and arguments in favour of closing the gender gap.

“We need to explain the difference between two questions; ‘does it make sense’ and ‘do you want it’. While no one wants to work longer, reducing the gender gap in retirement age is a must in the future,” she says.

Admitting it is not easy to change public awareness, Ha hopes one day everyone will understand how gender gaps are hindering the country’s development.

Only a couple of years ago, the senior TV editor says, she never questioned the gender gap at retirement age. “I thought since women and men are different, different laws should apply too,” she recalls.

Her perspective started to change when she began attending workshops on social protection and retirement related issues, facilitating high-level discussions at national forums, joining media trainings, and interviewing experts from the International Labour Organization (ILO) for VTV programmes. This way, she became aware of the consequences of the gender gap.

“It’s such a ridiculous, huge gap,” she says. “And the gap would only widen, with men having much more time to advance in their career, if the status-quo is maintained.”

The ILO office in Viet Nam has helped the country, at the request of the Government, improve its laws and policies, in particular labour law and social insurance reform. The ILO provided technical and advocacy support under the New Industrial Relations Framework programme, co-funded by the US Department of Labor, the EU, and the Japan-funded project on extending social security coverage in ASEAN.

From protection to discrimination

The five-year gap in retirement ages between women and men, as well as some other gender based discrimination in the country’s legal system, was built upon the assumption that women were weaker and needed protecting.

“The disconnection between the protective approach of the current laws and the proven abilities and ambitions of women, becomes starker everyday as the need for change becomes more urgent,” says Andrea Prince, labour lawyer at the ILO, adding that, “the inequality created by the five-year gap in retirement ages also results in women receiving less training and fewer promotions, and lower earnings during their working life.”.

“By retiring earlier, women receive a lower pension because they have contributed less, and often at lower wages for the same jobs as men, while living longer,” says Nuno Cunha , ILO specialist on social security.

Changing the law also requires changing of public perceptions and attitudes, which is not easy.

“It is difficult to enhance public awareness, but at least the media’s views have changed positively on the issue of the gender gap in retirement age over the past few years. They moved from being against equalizing retirement age for women and men, to highlighting the necessity to do it” says Ha.

Ha appreciates what the ILO has done in Viet Nam to support the country’s journalists and other stakeholders, by providing evidence-based arguments and practical experience from other countries. Now, she is planning more programmes on the issue, because the revision of Viet Nam’s Labour Code will be discussed on 12 June at the National Assembly, and until the Deputies vote on the bill in their second sitting this October.